Tara Moss is an author, novelist, documentary maker and presenter, speaker and human rights advocate. Since 1999 she has written 11 bestselling books, published in 19 countries and 13 languages, including the acclaimed Mak Vanderwall crime fiction series and the Pandora English paranormal series.

Her first non-fiction book, the critically acclaimed The Fictional Woman, was published in 2014 and became a number one national non-fiction bestseller, and her iconic cover design, featuring her face labeled with 'fictions' or stereotypes about women won Best Non-Fiction Book Design.

She is a PhD Candidate at the University of Sydney, and has earned her private investigator credentials (Cert III) from the Australian Security Academy.

This title is not yet published. It is available for purchase now and will arrive at our Sydney warehouse from our US supplier within 1-2 weeks of the release date listed above.

An overall delivery time for this item after publication, including the 1-2 week arrival time to A&R, to your address is:

Be the first to review The War Widow. 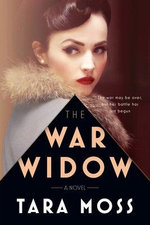