The Warramunga's War is a sweeping narrative of the friendship that forms between a young Australian army officer, Jamie Munro, and an educated half-caste Warramunga aboriginal NCO, Jack `Jacko' O'Brien, during the Syrian campaign against the Vichy French in World War II. Jacko rescues a wounded Jamie after which they are conscripted in Cairo by MI6. Here, Jamie and Jacko learn about the seamy side of war in counterespionage as they track down German spies. The principal fictional characters interact with actual historical figures and events throughout the story.
As the desert war escalates to the west of Cairo, the MI6 team confuses the enemy with misleading radio messages using German codes and using local entertainers as undercover agents. On one of his day leaves, Jacko meets a beautiful young Syrian-French girl and a strong romantic bond forms between the two during his time in Cairo.
Following the end of the desert war, Jamie and Jacko are assigned to wartime intelligence work in Southeast Asia. After the end of the Pacific war, they initiate the Darwin operations of the CIS, the Commonwealth Investigation Service. On the trail of two suspected wartime German agents, they discover the agents have formed a dangerous criminal gang with an individual they had known during their time in Cairo. The tracking skills of the Warramunga are needed to finally catch up with the murderous gang in Western Australia's Kimberley region. 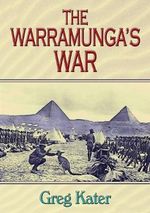 Historical Fiction War & combat fiction
Hold on while we process your request.