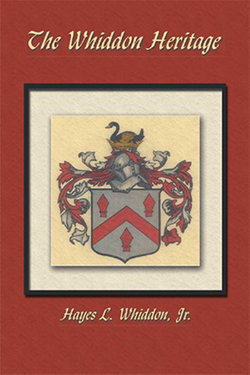 Almost ten years of genealogical research, on the Whiddon family, has provided a wealth of information that is the basis for an interesting story. The story inAmericabegan in 1635 when sixteen year old John Whiddon crossed the Atlantic and stepped ontoVirginiasoil. It continues through William, son of the immigrant, and covers nine generations. Although the author followed his direct line of descent, sufficient information is provided to permit other lines to be picked-up at any point. The story is told in semi-narrative form, with historical context, to make it human and personal. It covers the Whiddon family through time and place to give a clear picture ofThe Whiddon Heritage. Also, covered are the lines of descent of the other two sons of John the Immigrant.

This book has the most extensive coverage of the Whiddons of Tudor England ever published.

The Whiddon family of Chagford, in thecountyofDevon, was very prominent in the 16thand 17thcenturies. The family reached it's zenith under Sir John Whiddon, Judge of the King's Bench. Included are several generations of this very powerful and influential family. They served both the Church and the English legal system.

Captain Jacob Whiddon was a 16thcentury seadog, a privateer in the service of Sir Walter Raleigh. The mariners with whom he sailed included Sir Francis Drake and Sir Richard Grenville. Vivid accounts of his adventures are provided that includes the fight against the Spanish Armada and his voyage toSouth Americato discover gold in El Dorado.&nbsp;

The book is well illustrated to illuminate the lives of the Whiddon forebears.

Be the first to review The Whiddon Heritage.