The Wizards of Once: Book 1

From the bestselling author of How to Train Your Dragon comes an exciting high-adventure series - set in an ancient, magical time, full of Wizards, Warriors, Giants and Sprites.

This is the story of a young boy Wizard and a young girl Warrior who have been taught since birth to hate each other like poison; and the thrilling tale of what happens when their two worlds collide.

Perfect for boys and girls who love fantasy adventure... Once there was Magic, and the Magic lived in the dark forests.

Until the Warriors came... Xar is a Wizard boy who has no Magic, and will do anything to get it.

Wish is a Warrior girl, but she owns a banned Magical Object, and she will do anything to conceal it.

In this whirlwind adventure, Xar and Wish must forget their differences if they're going to make it to the dungeons at Warrior Fort. Where something that has been sleeping for hundreds of years is stirring...

Cressida Cowell is the author and the illustrator of the bestselling How to Train Your Dragon book series, and the author of the Emily Brown picture books, illustrated by Neal Layton.

How to Train Your Dragon has sold over 8 million books worldwide in 37 languages. It is also an award-winning DreamWorks film series, and a TV series shown on Netflix and CBBC. The first book in Cressida's new series, Wizards of Once, publishes in September 2017.

Cressida is an ambassador for the National Literacy Trust and the Reading Agency and a founder patron of the Children's Media Foundation. She has won numerous prizes for her books, including the Gold Award in the Nestle Children's Book Prize and 'Philosophy Now' magazine's 2015 'Award for Contributions in the Fight Against Stupidity'.

She grew up in London and on a small, uninhabited island off the west coast of Scotland and she now lives in Hammersmith with her husband, three children and a dog called Pigeon.

Be the first to review The Wizards of Once: Book 1 . 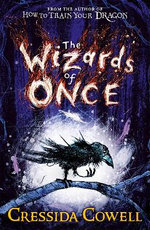 The Wizards of Once: Book 1