'Emily Bronte had written this novel especially for her. For her benefit she had sat alone in her narrow bed in the parsonage, her lap desk on her knees, death all around her with that graveyard right next door, the cold wind from the moors behind rattling the windows... But who had Dove written her story for?'

Dove is writing a novel for herself, for her mother and for their literary heroines. It describes the life of Ellis, an ordinary young woman of the 1960s troubled by secrets and gaps in her past.

Having read Wuthering Heights to her dying mother, Dove finds she cannot shake off the influence of that singular novel: it has infected her like a disease. In grief's aftermath, she follows the story Wuthering Heights has inspired to discover more about Ellis, who has emerged from the pages of fiction herself - or has she? - to become a modern successful career woman.

The Women's Pages is about the choices and compromises women make, about their griefs and losses, and about the cold aching spaces that are left when they disappear from the story. It explores the mysterious process of creativity, and the way stories are shaped and fiction is formed. Right up to its astonishing conclusion, The Women's Pages asserts the power of the reader's imagination, which can make the deepest desires and strangest dreams come true.

Debra Adelaide is the author or editor of more than fourteen books, including the best-selling Motherlove series (1996-98) and Acts of Dog (2003).

Her novels include The Hotel Albatross (1995), Serpent Dust (1998) and the best-selling The Household Guide to Dying (2008), which was sold around the world.

In 2013 she published her first collection of short stories, Letter to George Clooney, which was long- and short-listed for three literary awards. Her most recent book is the edited collection, The Simple Act of Reading (2015). She is an associate professor in creative writing at the University of Technology, Sydney. 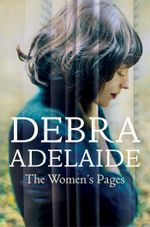