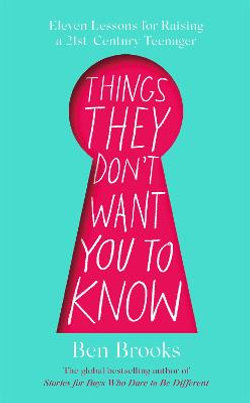 Things They Don't Want You to Know

How to Raise a 21st Century Teenager

How to raise a teenager in the 21st century from the global bestselling writer Ben Brooks.

A field guide for parents about the secret lives of 21st century teenagers - from relationships to self-harm, from drugs to sexting - and how you can help them and yourself through these turbulent years.

The child-rearing tactics they'd read about in parenting manuals or learned from their own parents were useless. Anyway, how do you punish someone who's already so miserable?

I'm not an expert, a psychologist, or even a particularly good person, but I do understand the unique kinds of troubles that come with trying to grow up in the current climate, and I wanted to share what would have helped me, my friends, and everyone else I spoke to while writing this book.

It might be hard to read what I write about self-harming, body piercings, gender confusion, drugs and social media angst. It might involve unpleasant surprises and be occasionally disgusting, but it could also help you to understand and support your kids. They won't thank you, but they might hate you less."

Ben Brooks is the author of the bestselling and ground-breaking Stories for Boys Who Dare To Be Different, which was the winner of Children's Book of the Year at the National Book Awards. The Impossible Boy is his first novel for children. He lives in Bulgaria.

Be the first to review Things They Don't Want You to Know.

Things They Don't Want You to Know