Thinking about Poverty provides a critical understanding of poverty in the global context: how global structures affect people in Australia and the way policy-makers respond.

In the midst of waning public interest, the book fills an important gap in the current public discourse on poverty and covers:

Thinking about Poverty argues that the quality of any society must be judged by its values and norms; that without a just and decent moral code, humanity is unlikely to be able to survive the social, economic and political challenges ahead.

Having large numbers living in deprived conditions, while a few live in extraordinary luxury is clearly not just - nor is it morally defensible. The book therefore concludes that political leaders are liable to lose the legitimacy to govern if they continue the current course of governing for a chosen few rather than for the overall common good.

Not just a critique, Thinking about Poverty puts forward a range of policy strategies and alternative economic thinking. With contributions from academics and practitioners, the book makes a contemporary and accessible contribution to discourse about poverty in Australia.

Be the first to review Thinking about Poverty. 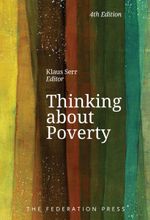