A Mindless Colouring Book for the Whole Goddamn Family

Domestic bliss? As if! Home is where the annoying is. But home is where you can colour in, without the shame of people seeing you!

This Annoying Domestic Life, the follow-up to Oslo Davis' This Annoying Life, comes to you from deep inside the familial bosom, with an even more miserable collection of images awaiting your ridiculous attempts at colouring in.

Designed for mums, dads, kids and old people on all levels of the angst spectrum, This Annoying Domestic Life: A mindless colouring book for the whole goddamn family is less complicated than a divorce and cheaper than sending everyone to a shrink.

Set your imagination free . . . find your way back to you, again. For families of all ages.

About the Author
Oslo Davis is an illustrator and cartoonist living in Melbourne. He has drawn for various publications worldwide, including the New York Times, Meanjin, The Age, The Big Issue, Sleepers Almanac, Desktop Magazine, Australian Book Review and Art Gallery Guide.

Oslo Davis draws cartoons for the Age, as well as a weekly cartoon called Overheard in the Sunday Age. In 2011 Oslo was a Walkley Award finalist in the cartoon category. Oslo also completed a number of drawings for the Golden Plains music festivals, for NGV Australia and for the Melbourne Immigration Museum. In 2012 he wrote, directed and drew a short animation titled Melbhattan.

Be the first to review This Annoying Domestic Life. 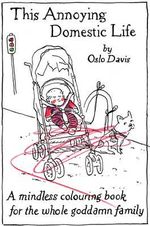