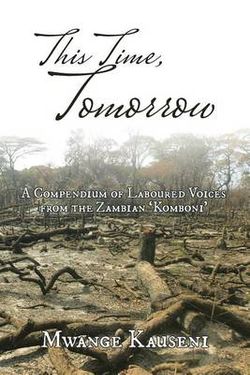 A Compendium of Laboured Voices from the Zambian 'Komboni'

This Time, Tomorrow is an anthology of poems composed by the late Mwange Kauseni--one of the most outstanding Zambian journalists of his generation. Published and presented here for the first time, the poems are a legacy of his past and span more than two decades of creative process. The poems depict experiences and allusions of the African continent, Asia, and Latin America, where the poet worked as a journalist.

For the international audience who enjoyed and appreciated Mwange's stories and columns in magazines and newspapers, however, this collection will come as a surprise to most. Yet, in these pages, we present to the world the side of Mwange Kauseni that most people hardly suspected ever existed. As a poet, therefore, Mwange echoes the plight of the downtrodden and marginalized and taunts the excesses and foibles of the postcolonial-African political elites. In some of his work, though, the poet eulogizes his connections with his past and cultural roots and decries the advent of modernity. He urges poets never to give up their craft but to create verses for the masses.

Even though the poems were created from personal experiences, This Time, Tomorrow is indeed Pan-Africanist in character.

Be the first to review This Time.