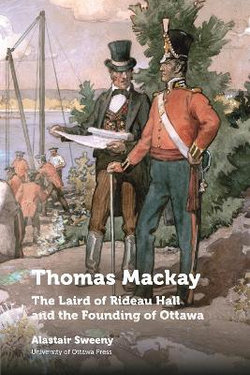 The Laird of Rideau Hall and the Founding of Ottawa

The Laird of Rideau Hall explores the life and times of Thomas Mackay, the chief founder of Bytown/Ottawa.
Born and raised in Perth, Scotland, Mackay and his family emigrated to Montreal in 1817. Partnering with fellow mason John Redpath, he built the locks of the first Lachine Canal, did military construction work at Fort Lennox and St.&#8239;Helen's Island, and supplied stone for Montreal's Notre Dame Basilica. Engaged by Colonel By of the Royal Engineers to build the Ottawa and Hartwell Locks of the Rideau Canal, Mackay used his profits to found the village of New Edinburgh and build a mill complex at Rideau Falls, as well as the residence his daughter named Rideau Hall. With his hefty canal profits--paid in Spanish silver pieces of eight--Mackay was a major financier of the Ottawa and Prescott Railway, and chief promoter of Ottawa as the capital of Canada. He served as Colonel of the Russell and Carleton militias, was MLA for Russell for seven years, and a member of the Legislative Council of Canada for fifteen.&nbsp;
After Mackay's death in 1855, his son-in-law and estate manager Thomas Keefer sold Rideau Hall to the government to serve as a residence for Canada's Governor General. Keefer also developed a tract of land owned by the estate into the village of Rockcliffe Park, today home to over 70 diplomatic residences.&nbsp;
Published in English.

Be the first to review Thomas Mackay.