by Jason Aaron and Jackson Guice

Somewhere at the end of time, all the gods of the universe are enslaved, working to build a machine that will forever change the face of creation.

What is...the Godbomb? And what can Thor, the last free god in all the cosmos, do to stop it?

As Gorr's master plan continues to unfold, all hope for divinity is lost as Thor finds himself in chains alongside his fellow gods.

As the clock ticks down on one very large bomb, as enslaved gods look to the skies for a savior, enter...the Girls of Thunder!

Writer Jason Aaron's early collaboration with artist Cameron Stewart on DC/Vertigo's The Other Side was named one of The Washington Post's "Best Comics of 2007."

His next project, Scalped, garnered industry-wide praise and led to a guest spot on Wolverine. After signing with Marvel Comics, Aaron completed another run on Wolverine, as well as stints on Black Panther and Ghost Rider, before moving on to launch Wolverine Weapon X and relaunch Wolverine.

He brought Frank Castle's tortured tale to a devastating end in the pages of PunisherMAX and, in the wake of his status-quo-shattering miniseries X-Men: Schism, helped usher in a new era for Marvel's mutants in the pages of Wolverine and the X-Men.

Jackson "Butch" Guice began his Marvel career during the 1980s penciling Micronauts, New Mutants and X-Factor. He moved to DC for a fan-favorite run on Flash, subsequently illustrating nearly three years' worth of Action Comics and participating in the "Death of Superman" event.

He also co-created Resurrection Man and provided artwork for Birds of Prey. Back at Marvel, he penciled Captain America, Iron Man, Ultimate Origins and more.

Be the first to review Thor: God of Thunder. 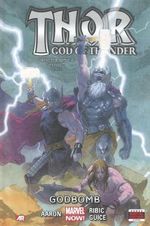 by Jason Aaron and Jackson Guice