Time For The Country

The House At The End Of The Street

Only one person can get in her way: Josh Rutherford, the love of her life who kissed her and left her ten years ago, is returning home. Josh will only be in town for five days. Hell finally sever the ties to an unhappy youth and then hell leave forever. Its all in the plan. Everything except for Gem.

And she never thinks about all she lost that night. So when her best friend convinces her to go back to their drought-stricken home for their school reunion, they strike a deal.One hour: get in, get out. But things become more complicated than she ever could have anticipated

Marnie St Clair She went from having everything to having nothing except what she really needed. Lily Schofield has never had to think about money, until shes suddenly left destitute by her fathers shady dealings.

Lily has only one place to go: Mirabook, her mothers country estate, where she spent every childhood summer running wild with the station managers son, Josh. Until that last time, ten years ago, when everything went horribly wrong.

Josh Farrell may have worshipped his summer friend, but that was before he found out what she and her family were really like. But now Lily is back in town, and all Josh can see is the truckload of unfinished business she brought with her

Born in Wales and now living in Australia, Jennie Jones loved everything with a romantic element from an early age. That’s why she became an actor before she started writing. She toured the UK in all the grand old theatres, becoming someone else for two hours, eight performances a week and loved every second.

Now, Jennie loves writing rich, warm-hearted and refreshing stories of adventures of the heart. She’s a self-confessed would-be small town country girl and longs for the day when she and her family can set up home in a cute country cottage in the middle of a huge field. Until then, Jennie is enjoying life a five minute walk to the beach. She can hear the ocean as she types her stories.

She says writing keeps her artistic nature dancing and her imagination bubbling and like acting, she can’t envisage a day when it will ever get boring.

Be the first to review Time For The Country. 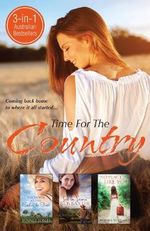 Time For The Country