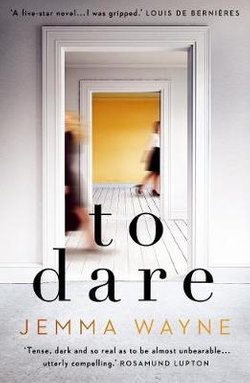 ''Tense, dark and so real as to be almost unbearable, this novel is utterly compelling.''Rosamund Lupton, international bestselling author of Sister and Three Hours

Veronica and her wealthy husband George are unpacking boxes, hoping a fresh start in their newly refurbished Victorian terrace will help them heal from a recent trauma.

Next door, Simone returns to her neglected council flat. Miserable and trapped, she struggles to take care of her children under the watch of her controlling husband Terry.

When childhood friend Sarah re-enters Veronica''s life, things are thrown even further off balance. As tensions in their own lives rise, the painful memory that binds them threatens to spill into their present.

Three lives collide in this story of family, inequality and revenge.

''Wayne weaves a book that is at once engrossing and an exploration of what it means to be a woman, a moral person, a parent, and a neighbour.''Rowan Hisayo Buchanan, author of Starling Days and Harmless Like You

''To Dareis a vivid, poignant, and compelling read; Jemma Wayne skilfully weaves her narrative threads tighter and tighter as the story moves towards its nerve-jangling conclusion. I loved it - I couldn''t put it down!''Saskia Sarginson

''A five star novel by one of our best writers. I was gripped.''Louis de Bernières, author of the international bestseller Captain Corelli''s Mandolin

''Dares, violent jealousies and chasms between having and not having are at the heart of this uncomfortable urban tale. Simone has found herself a new job but is biding her time to tell her angry, addicted husband Terry. Next door, Veronica has just moved into her smart new home, and from the chill of the marital bed, hears brutal body thumps against the party wall. Then Veronica runs into Sarah, her former teenage best friend, and Sarah hesitantly allows a reconnection. A power game kicks off. The collision of their lives, determined by upbringing, powers Jemma Wayne''s fierce storytelling.''Sainsbury''s Magazine Book Club

''To Dareis a superior thriller, unflinching in its examination of class prejudice and in its portrayal of grief. Wayne writes beautifully with scarcely a word wasted. The characters are real and relatable and watching them all go through Wayne''s devious wringer is irresistibly entertaining. The final suspenseful chapters had my heart pounding as Wayne''s expertly drip-fed plot begins to congeal like spilt blood. I still can''t shake the image of the shocking conclusion from my mind.''A.S. Hatch

''Jemma owes me a night''s sleep! What a transfixing book. The tension spirals out of control and you have no idea how it will end... It''s clever and well written and I can see how Jemma has been shortlisted for so many prizes.''Hilary Boyd, author of Thursdays in the Park and The Lie

''To Dareis not only a skilful and intimate dissection of the power struggles that exist between female friends in any era, but also a daring exploration of our class divides, and of the most terrifying issues hidden behind closed doors... To Dare is a rare example of fiction that is equally literary and commercial.''Ophelia Field, author of The Favourite

''Exquisitely written with a fine eye for detail and characterisation. A poignant portrayal of friendship and strangers who have more - and yet less - in common than first meets the eye.''Jane Corry, author of My Husband''s Wife and Blood Sisters

''In an exploration of very different lives and backgrounds, To Dare is a novel with exquisitely drawn characters and multi-layered prose. Secrets weigh heavily in this beautifully written novel, and they''ll sit with you long after you finish.''Rachael Blok

''To Dareis a tense, fast-paced novel that combines an edge-of-the-seat narrative with an unflinching examination of inequality, jealousy and friendship. Superbly observed, the characters remain in the mind long after the final page is turned. A cut above others in this genre.''WI Life magazine

''Wayne shines creative light on the internal world of her characters, fleshing them out with deft dialogue and interplay with the significant others in their lives.''The Jewish Chronicle

Be the first to review To Dare.