To Look on Death No More 1

5/5 Rating 1 Reviews Add your review Edit my Review
Tweet
RRP  $20.85 $18.80
In autumn of 1943, a lone allied soldier parachutes into Greece. His stated goal: to build an airstrip for the British. Brendon O'Malley is an Irishman, and he soon discovers that fighting the Nazis is not the same as embracing the British, who have seriously misled him about his mission. Wounded during the drop, he's set upon and robbed by a seventeen-year-old girl, Danae, and her little brother, Stefanos, who hold him captive for over six weeks, first in a cave and later in the cellar of their home in Kalavryta. A wary friendship develops between the three. Over time O'Malley's relationship with the girl gradually deepens into love. Slowly O'Malley earns Danae's trust, and he stays on with her family in their house in the village. After his wounds heal, he heads up into the mountains to join the Greek soldiers, the antartes, who are suspicious of the British and slow to accept him into their ranks. O'Malley is no ordinary man, and his honesty, strength, and courage impress them and finally win the day. But disaster lies just ahead, and the Nazis, already a palpable presence in their lives, stage a savage attack on Kalavryta. Through it all, the love of this Irishman for his indomitable Greek muse cannot be extinguished. 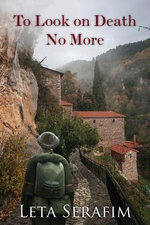 To Look on Death No More