Blast off on another learn-to-draw adventure with Buzz Lightyear, Woody, and other favorite characters from Disney-Pixar's beloved film franchise, Toy Story, including the toys featured in Toy Story 3. Young fans will learn to draw the characters using the easy-to-follow, step-by-step instructions in this edition of Learn to Draw Disney-Pixar's Toy Story. Professional drawing tips help guide artists along the way.

All you'll need to start drawing are a few art supplies. And the easy-to-follow instructions in this book will guide you through each step, showing you how each step builds upon the next to create a finished piece of art. You just need to grab a pencil, a piece of paper, and your copy of Learn to Draw Disney-Pixar's Toy Story, and flip to the character you want to draw. You'll draw the basic shapes shown in step one, and move on to step two, step three, and keep going The new lines in each step are shown in blue, so you'll know exactly what to draw. After adding all the details in each step, darken the lines you want to keep and erase the rest. Finally, add color to your drawing with felt-tip markers, colored pencils, watercolors, or acrylic paints.

Be the first to review Toy Story. 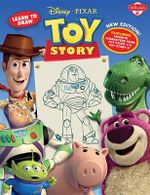