The whole place seems cold, and he feels a terrible sense of dread. He calls out, but gets no reply. Taking a knife from the cutlery drawer, he unlocks the back door as an escape route. Then he sees her on the floor. Her eyes and mouth are open, and there is blood everywhere. He's too late.


After a strange phone call with his ex-wife, John James had sensed something was wrong and raced over to her house. As he stood in her bedroom doorway, transfixed by the sight of her body, the killer was almost certainly just a breath away, hiding behind the door. Had John walked in, he could have been the next victim. Instead, he left to call the police. The culprit escaped, taking with him the secret of a shocking murder that has shown no sign of being solved for nearly 40 years - until now.


Based on the international #1 podcast, Trace re-examines the 1980 murder of Maria James - the single mother of two sons, one with a disability - revealing abuse in the Catholic Church, cult activities, and claims of incompetence and corruption at the highest levels. Investigating possible conspiracies and uncovering fresh evidence, Rachael Brown's riveting investigation has won multiple media awards and may lead to the reopening of this chilling case. Broadcast journalist Rachael Brown is an RMIT graduate who began her career with the ABC in 2002 as its Melbourne cadet. She has since held several postings, including Europe correspondent from 2010 to 2013. In 2008, she won the Walkley Award for Best Radio Current Affairs Report for her investigation into the Victorian Medical Practitioners Board, whose negligence had contributed to the sexual assaults of 14 women.

Rachael was the creator, investigator, and host of the ABC's first true-crime podcast, Trace, which reviewed the cold case of Melbourne mother Maria James.

Trace won the 2017 Walkley Award for Innovation for the way the podcast tapped into broad community grapevines and attracted vital new leads from the public that were rolled into subsequent episodes, which allowed Trace to evolve as it went to air.

Be the first to review Trace. 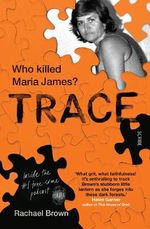