Is any movement in defense of women's rights a feminist movement? Simple answers to this question have given rise to as many misunderstandings and conflicts as cooperative collaborations. Now the essays in Transitions, Environments, Translations explore the varied meanings of feminism in different political, cultural, and historical contexts. They respond to the claim that feminism is Western in origin and universalist in theory, and to the assumption that feminist goals are self-evident and the same in all contexts. Rather than assume that there is a blueprint by which to measure the strength or success of feminism in different parts of the world, these essays consider feminism to be a site of local, national and international conflict. They ask: What is at stake in various political efforts by women in different parts of the world? What meanings have women given to their efforts? What has been their relationship to feminism--as a concept and as an international movement? What happens when feminist ideas are translated from one language, one political context, to another?
Contributors: Bina Agarwal; Tsehai Berhane-Selassie; Rosi Braidotti; Jacklyn Cock; Myra Marx Ferree; Malgorzata Fuszara; Milica Antic Garber; Susan Gal; Yaakov Garb; Evelynn Hammonds; Hana Havelkova; Alice Kessler-Harris; Djurdja Knezevic; Svetlana Kupryaskina; Sabine Lang; Eva Malek-Lewy; Afsaneh Najmabadi; Zakia Patbak; Andrea Peto; Anastasia Posadskaya; Mamphela Ramphele; Svetlana Slapsak; Ann Snitrow; Noel Sturgeon; Anna Tsing; and Peggy Watson. The contributors to Transitions, Environments, Translations examine these issues in concrete detail. Scholars from Eastern Europe and the former Soviet Union, South Africa, China, Iran, India, Indonesia, Ethiopia, and the US provide substantive documentation of different political and cultural initiatives (as well as explanations for them), and they explore the terms by which successful collaborations (and translations) might be made.

Be the first to review Transitions Environments Translations. 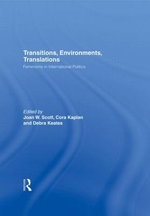