by Boyd Morrison and Clive Cussler

Juan Cabrillo and the crew of the Oregon are about to sail into a perfect storm of danger. Their mission? To stop a new world war . . .

Hired to search for a collection of paintings worth half a billion dollars, Juan Cabrillo soon finds himself in much deeper waters when he discovers the vicious leader of a Filipino insurgency is using the paintings they seek to finance his attacks.

Far worse, Salvadore Locsin has stumbled upon a deadly secret of World War II: a serum designed to create an army of super-warriors.

With Locsin's plan threatening to engulf Asia in war, Oregon's crew must take on the rebel commander, a South African mercenary intent on taking the drug for himself, a swarm of torpedo drones targeting the US Navy, and a gathering megastorm.

For Juan and his elite team, failure is not an option. An apocalyptic world war is on the horizon, and only they can stand in its way.

Typhoon Fury is a masterful suspense novel, full of the adventure, break-neck pace and danger that make Clive Cussler an unbeatable storyteller.

Boyd Morrison is the coauthor with Cussler of the Oregon Files novels Piranha and The Emperor's Revenge, and the author of four other books.

He is also an actor and engineer, with a doctorate in engineering from Virginia Tech, who has worked on NASA's space station project at Johnson Space Center and developed several patents at Thomson/RCA.

In 2003, he fulfilled a lifelong dream by becoming a Jeopardy! champion. He lives in Seattle.

Be the first to review Typhoon Fury. 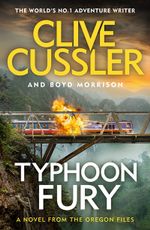 by Boyd Morrison and Clive Cussler