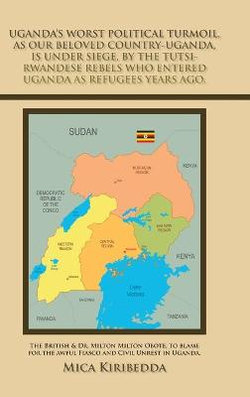 Uganda's Worst Political Turmoil, as Our Beloved Country-Uganda, Is Under Siege, by the Tutsi- Rwandese Rebels Who Entered Uganda as Refugees Years Ago.

The British & Dr. Milton Milton Obote, to Blame for the Awful Fiasco and Civil Unrest in Uganda.

This book is about a shocking revelation of a sovereign country- Uganda, which is under abominable siege, by a foreign occupation army from Rwanda, with its diabolic criminal gang, who entered Uganda as refugees, including the so-called General Yoweri Museveni. It was alleged that they fled their country Rwanda escaping the Hutu's heightened political tensions and repressions in the 60s, under J. Habyarimana's regime. By the time Uganda gained its Independence from the British in 1962, it was unthinkable, why the British who were watching the massive Tutsi-Rwanda influx into Uganda yet, they could not stop it, why? But in 1980, the Tutsi-Rwanda ethnic groups had organized themselves and formed their military front -the NRA/RPU-Rwanda Patriotic Unity under Yoweri Museveni, the guerrilla warfare Leader. The NRA/RPU waged guerrilla warfare against the Government forces commanded by General Tito Okello until he was defeated, and so, they seized power by the barrel of the gun in 1986. It was a terrible miscalculated scenario as nobody could dare question the Guerrilla army their legality and mandate to govern the country. It was a hoax. General Museveni's totalitarian, the-ruthless regime, has deliberately destroyed the country to its foundation and sold whatever the national assets available, and looted whatever they could get hold of, yet, they have committed heinous and unspeakable atrocities to the citizens of Uganda. They have committed crimes against humanity, with Museveni's fatality list around a million lives. This book is a whistle blower to the world, that Uganda ceased to be a sovereign country from February 1986, the period General Museveni seized power from Ugandans and the country is under siege since. Finally, Ugandans appeal to the International Community, United Nations, and African Unity and all peace-loving people in the world, to come to the Ugandans'resque as General Museveni's diabolic -the ruthless regime is waiting to crush and slaughter thousands of demonstrators at the country's general election, their only hope to liberate Uganda from the foreign forces of Tutsi-Rwanda' s army of occupation. The International Community's intervention is essential to avert another Rwanda genocide in Uganda.

Be the first to review Uganda's Worst Political Turmoil.

Uganda's Worst Political Turmoil, as Our Beloved Country-Uganda, Is Under Siege, by the Tutsi- Rwandese Rebels Who Entered Uganda as Refugees Years Ago.