In the aftermath of Secret Wars, in the dawn of the new universe, Steve Rogers assembles an all-new team of the Avengers Unity Squad, consisting of super-humans, mutants, Inhumans and Deadpool?! It's a new team with the same mission, facing all-new threats! Collecting Uncanny Avengers Vol.3 #1-5 (subject to change).

Gerry Duggan received the education he needed to write from a steady diet of comic books and Late Night With David Letterman. He didn't know that. . . so he wasted a ton of money on a pricey diploma from Emerson College in Boston.

After graduating, he arrived in Los Angeles and hooked up almost immediately with Brian Posehn. Together, they've written Marvel NOW!'s Deadpool, The Simpsons and The Last Christmas, the true story of Santa Claus after the apocalypse.

Both he and artist Phil Noto earned Eisner Award nominations for The Infinite Horizon, a re-imagininging of The Odyssey in a dystopian future.

Be the first to review Uncanny Avengers Volume 1. 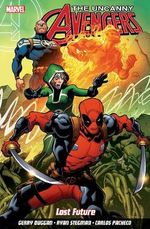