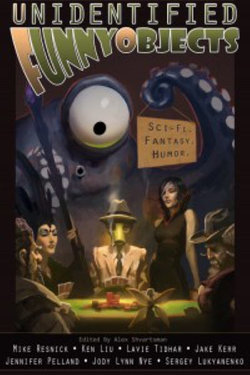 by Ferrett Steinmetz, Mike Resnick,  Michael Kurland and others
Publication Date: 16/12/2012
Be the first to write a review
Tweet

Ferrett Steinmetz is a graduate of both the Clarion Writers' Workshop and Viable Paradise. He was nominated for the Nebula Award in 2012, and for the Compton Crook Award in 2015. He is the author of numerous short stories as well as 'Mancer trilogy and The Uploaded. Ferret lives in Cleveland with his very clever wife, a small black dog of indeterminate origin, and a friendly ghost.

Michael Kurland is the author of several science-fiction books as well as a detective series based on characters from the Sherlock Holmes mysteries.

His nonfiction works include The Spymaster's Handbook and How to Solve a Murder: The Forensic Handbook.

Lavie Tidhar (The Bookman; A Man Lies Dreaming; The Violent Century) is the author of the breakout Campbell and Neukom award-winning novel Central Station, which has been translated into ten languages.

He has also received the British Science Fiction, Neukom Literary, and World Fantasy awards. Tidhar was born in Israel, grew up on a kibbutz, has lived in south Africa, Laos, and Vanuatu, and currently resides in London.

Leah Cypess is the author of four YA novels- Mistwood, Nightspell, Death Sworn, and Death Marked. Both Mistwood and Death Sworn were on the Kirkus Best Books for Teens list, and Death Sworn was a Teen Vogue "Most Exciting YA Book" of the year. She lives in Silver Spring, Maryland. Thornwoood is her middle grade debut.

Stephanie Burgis is a dual citizen of the US and the UK and lives in South Wales (land of dragons) with her husband, the author Patrick Samphire, and their children.

The Storyteller's Secret is Stephanie's second novel for Bloombsury, following The Dragon with a Chocolate Heart.

Ken Liu was born in China and moved to America at the age of 11.

He has won the Sturgeon, the Hugo (three times), the Nebula, and the World Fantasy Awards

Marko Kloos is the author of two military science fiction series: The Palladium Wars, which includes Aftershocks and Ballistic, and the Frontlines series, which includes, most recently, Points of Impact. Born in Germany and raised in and around the city of Munster, Marko was previously a soldier, bookseller, freight dockworker, and corporate IT administrator before deciding that he wasn't cut out for anything except making stuff up for fun and profit.

Be the first to review Unidentified Funny Objects.

by Ferrett Steinmetz, Mike Resnick,  Michael Kurland and others