The iconic multi-award-winning history of colonial Tasmania in a beautifully illustrated hardcover edition, with a new foreword by Richard Flanagan.

Almost half of the convicts who came to Australia came to Van Diemen's Land. There they found a land of bounty and a penal society, a kangaroo economy and a new way of life.

In this multi-award-winning history of colonial Tasmania, James Boyce shows how the newcomers were changed by the natural world they encountered. Escaping authority, they soon settled away from the towns, dressing in kangaroo skin and living off the land.

Behind the official attempt to create a Little England was another story of adaptation, in which the poor, the exiled and the criminal made a new home in a strange land.

This is their story, the story of Van Diemen's Land.

"The most significant colonial history since The Fatal Shore. In re-imagining Australia's past, it invents a new future." - Richard Flanagan

"Tasmania is only a short flight from where I live, but I have never been there. Now I will go, because its grasslands, mountains, bays and islands have become real to me, each territory with its own history and bearing the subtle scars of its particular past." - Inga Clendinnen

James Boyce is the acclaimed author of Van Diemen’s Land, 1835 and Born Bad.

His books have been shortlisted for almost every major Australian literary award and he has won the Tasmania Book Prize on two occasions.

He is also a professional social worker, who worked for many years in social policy and research and has been involved in the poker-machine debate for nearly twenty years.

Be the first to review Van Diemen's Land. 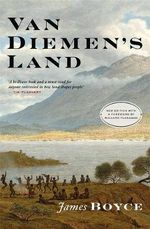