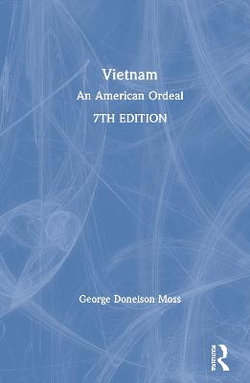 Now in its 7th edition, Vietnam: An American Ordeal continues to provide a thorough account of the failed American effort to create a viable, non-Communist state in Southern Vietnam.


Unlike most general histories of U.S. involvement in Vietnam, which are either conventional diplomatic or military histories, this volume synthesizes the perspectives to explore both dimensions of the struggle in greater depth, elucidating more of the complexities of the U.S.-Vietnam entanglement. It explains why Americans tried so hard for so long to stop the spread of Communism into Indochina and why they failed. In this new edition, George Donelson Moss expands and refines key moments of the Vietnam War and its aftermath, including the strategic and diplomatic background for United States' involvement in Indochina during World War II; how the French, with British and American support, regained control in southern Vietnam, Saigon, and the vicinity, in the fall, 1945; the account for the formation of SEATO; and the account of the Sino-Vietnamese War of 1979. The text has also been revised and updated to align with recently published monographic literature on the time period. The accessible writing will enable students to gain a solid understanding of how and why the United States went to war against The Democratic Republic of Vietnam, and why it lost the long, bitter conflict.


This book will be of interest to students and scholars of American history, the history of foreign relations, and the Vietnam War itself.

Be the first to review Vietnam.