Fiction. A man tries to piece together the events of the day he nearly died. Another believes that a friend has betrayed him, or is it that he has betrayed himself? A woman tries to escape the life she has known, but finds it following her. The eight stories of disorientation and metamorphosis in Mark Wallace's WALKING DREAMS all concern characters who feel trapped and want to change who they are. The unconventional shape of these tales distorts time, place, and character to create an eerie and threatening atmosphere. The result is a series of surprises--some serious, some comic--in which the boundary between the real and the imagined breaks down. In the tradition of what British writer Robert Aickman called "the strange story," WALKING DREAMS explores a world that is poetic, horrifying, and very much like our own. "Mark Wallace writes like an avant-garde poet who knows how to tell a good story. Or like a fiction writer who knows how to fill his prose with cutting edge poetry. You finish Wallace's fiction with much more than you began with, the sense that your reading intelligence has been scrambled into a new kind of clarity, a new kind of pleasure that can only be fully sorted out over time"--Stephen-Paul Martin.

Be the first to review Walking Dreams. 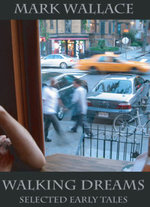