In a triumphant return to his much-loved Courtney series, Wilbur Smith introduces us to the bravest new member of the famed family, Saffron Courtney.

Saffron grows up on a sprawling Kenyan estate, under the watchful eye of her father, prominent businessman and distinguished war veteran Leon Courtney. Her childhood is idyllic, until a family tragedy forces her to grow up much faster than necessary. As she grows into a spirited teenager, her thirst for knowledge and adventures leads her to England, where she finds herself inevitably drawn into the heart of the gathering storm in the lead-up to World War II.

Gerhard von Meerbach is the privileged and idealistic younger brother of Konrad von Meerbach, heir to an industrial fortune, and vocal supporter of the Nazi Party. Gerhard struggles to stay true to his principles in an increasingly cruel world. His friendship with a Jewish man places him in danger, and forces him to take a stand against the forces of evil that have overtaken his country and his family. But, unknown to him, he is caught in a trap that could cost him everything he holds dear.

As the Second World War looms over them all, Saffron and Gerhard's worlds collide but will there be more to unite them than tear them apart?

A love story in the time of heroes, War Cry is the latest breathtaking episode in Wilbur Smith's epic account of one beloved family.

Wilbur Smith is a global phenomenon: a distinguished author with a large and established readership built up over fifty-five years of writing with sales of over 120 million novels worldwide.

Born in Central Africa in 1933, Wilbur became a full-time writer in 1964 following the success of When the Lion Feeds, and has since published over thirty novels, including the Courtney series, the Ballantyne series, the Egyptian series, the Hector Cross series and many successful standalone novels, all meticulously researched on his numerous expeditions worldwide. His books have now been translated into twenty-six languages.

The establishment of the Wilbur & Niso Smith Foundation in 2015 cemented Wilbur's passion for empowering writers, promoting literacy and advancing adventure writing as a genre. The foundation's flagship programme is the Wilbur Smith Adventure Writing Prize.

Be the first to review War Cry. 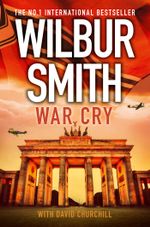 Fiction Political / legal thriller Sagas War & combat fiction Wilbur Smith Fiction For Him
Hold on while we process your request.