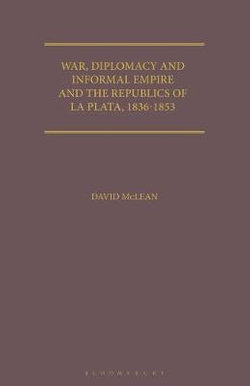 War, Diplomacy and Informal Empire and the Republics of La Plata, 1836-1853

It became an established practice in the 19th century for the European colonial powers - in particular, Britain and France - to exercise hegemony over large areas of the world by attempting to secure the election of governments that would favour their interests. Latin America was one such region which the colonial powers treated as their "informal empire". There has been much debate about the effectiveness of informal empire and it has generally been argued that the colonial powers found it more profitable to exercise control in this indirect manner than to administer territories directly. David McLean challenges this view, arguing that in practice there were great drawbacks to attempts to use diplomatic means to influence the domestic politics of the nations of Latin America.
Attempts to secure peace and favourable trading arrangements in the Argentine and Uruguay proved extremely problematic; long-distance communications between the European governments and their diplomats in Latin America were slow and unreliable; conflicts between the European commercial classes and their governments were unavoidable; and the legitimacy of the merging nationalist movements in Latin America proved hard for the European powers to contest. This is a new study of a major aspect of colonial history and should be of interest to historians and to those with an interest in international relations.

Be the first to review War.

War, Diplomacy and Informal Empire and the Republics of La Plata, 1836-1853