by Chris Wraight, Mike Brooks,  Ben Counter and others

Many are the horrors of the 41st Millennium, from alien tyrants to dark lords in the grip of Chaos. But arrayed against them are champions of humanity, who fight to defend all that is good in the galaxy. Explore the darker side of the Warhammer 40,000 universe with this bumper anthology.

Wracked by the ravages of war, the galaxy has known no peace for untold millennia. To exist is to fight. To thrive is to conquer. Once proud worlds lie in ruins at the hands of traitorous warlords and vile alien despots. Cowed by the unstoppable march of the Ruinous Powers, humanity stands on the precipice of oblivion.

All hope is banished.

Yet, there are many who take up arms against these horrors. Noble heroes of the Imperium sally forth to do battle while enigmatic inquisitors explore the shadowy secrets of this benighted era. In the terror of the 41st Millennium, righteous lords and iron-willed tyrants clash to decide who is worthy of inheriting the galaxy.

Chris Wraight is the author of the Horus Heresy novels Scars and The Path of Heaven, the Primarchs novels Leman Russ: The Great Wolf and Jaghatai Khan: Warhawk of Chogoris, the novellas Brotherhood of the Storm and Wolf King, and the audio drama The Sigillite.

Additionally, he has many Warhammer novels to his name, including the Warhammer Chronicles novel Master of Dragons, which forms part of the War of Vengeance series. Chris lives and works in Bradford-on-Avon, in south-west England.

Mike Brooks is a speculative fiction author who lives in Nottingham, UK.

His work for Black Library includes the Warhammer 40,000 novel Rites of Passage, the Necromunda novella Wanted: Dead, and the short stories ‘The Path Unclear’, ‘A Common Ground’ and ‘Choke Point’. When not writing, he works for a homelessness charity, plays guitar and sings in a punk band, and DJs wherever anyone will tolerate him.

Ben Counter is a lifelong gamer and miniature enthusiast living in the UK, near Portsmouth. He is best known for his series of novels for Games Workshop including the Grey Knights and Soul Drinkers series, and has also written supplements for roleplaying games including Dark Heresy, Warhammer Fantasy Roleplay and World of Darkness. He is a founder of Death Spiral Games, publisher of the RPG Sleeper- Orphans of the Cold War.

Trademarks of his fiction include flights of Moorcockian strangeness, gruesome horror, blood-spattered action scenes and stratospheric body counts. A connoisseur of creative ways to waste time, he is a passionate (and, he likes to point out, award-winning) miniature painter, as well as a regular at his local game shop where he can be found playing miniature wargames, refereeing tournaments of Magic- the Gathering or running RPGs.

Justin D Hill is the author of the Warhammer 40,000 novel Cadia Stands, the Space Marine Battles novel Storm of Damocles and the short stories 'Last Step Backwards', 'Lost Hope' and 'The Battle of Tyrok Fields', following the adventures of Lord Castellan Ursarkar E. Creed. He has also written 'Truth Is My Weapon', and the Warhammer tales 'Golgfag's Revenge' and 'The Battle of Whitestone'. His novels have won a number of prizes, as well as being Washington Post and Sunday Times Books of the Year. He lives ten miles uphill from York, where he is indoctrinating his four children in the 40K lore.

Robbie MacNiven is a Highlands-born History graduate from the University of Edinburgh. He has written the Warhammer Age of Sigmar novella The Bone Desert, as well as the Warhammer 40,000 novels Blood of Iax, The Last Hunt, Carcharodons: Red Tithe, Carcharodons: Outer Dark and Legacy of Russ. His short stories include 'Redblade', 'A Song for the Lost' and 'Blood and Iron'. His hobbies include re-enacting, football and obsessing over Warhammer 40,000.

Josh Reynolds is the author of the Horus Heresy Primarchs novel Fulgrim: The Palatine Phoenix, and two audio dramas featuring the Blackshields: The False War and The Red Fief. His Warhammer 40,000 work includes Lukas the Trickster and the Fabius Bile novels Primogenitor and Clonelord.

He has written many stories set in the Age of Sigmar, including the novels Shadespire: The Mirrored City, Soul Wars, Eight Lamentations: Spear of Shadows, the Hallowed Knights novels Plague Garden and Black Pyramid, and Nagash: The Undying King. His tales of the Warhammer old world include The Return of Nagash and The Lord of the End Times, and two Gotrek & Felix novels. He lives and works in Sheffield.

Alec Worley is a well-known comics and science fiction and fantasy author, with numerous publications to his name. He is an avid fan of Warhammer 40,000 and has written many short stories for Black Library including 'Stormseeker’, 'Whispers' and 'Repentia'. He has recently forayed into Black Library Horror with the audio drama Perdition's Flame and his novella The Nothings, featured in the anthology Maledictions. He lives and works in London.

Ian St. Martin is the author of the Horus Heresy: Primarchs audio drama Konrad Curze: A Lesson in Darkness. He has also written the Warhammer 40,000 novels Lucius: The Faultless Blade and Deathwatch: Kryptman’s War, along with the short stories 'Adeptus Titanicus: Hunting Ground', 'City of Ruin' and 'In Wolves' Clothing'. He lives and works in Washington DC, caring for his cat and reading anything within reach.

Be the first to review Warhammer 40. 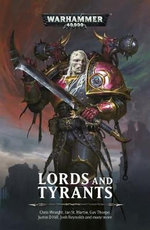 by Chris Wraight, Mike Brooks,  Ben Counter and others