Weir Do’s one of the weirdest kids in school.

With an unforgettable name, a crazy family and some seriously weird habits, fitting in won’t be easy...But it will be funny!

The CRAZY WEIRD Collection–it doesn’t get any weirder than that!

Anh Do (born 2 June 1977) is a Vietnamese-born Australian author, actor and comedian.

He has appeared on many Australian TV shows such as Thank God You're Here and Good News Week, and was runner-up on Dancing With The Stars in 2007.

He studied a combined Business Law degree at the University of Technology, Sydney.

He is the brother of film director Khoa Do and has acted in several of Khoa's films, including Footy Legends, which he co-wrote and produced. In 2012, his TV show Anh Does Vietnam began airing.

Be the first to review Weirdo: The Mega Weird Collection. 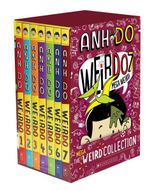 Humorous stories (Children's / Teenage) Anh Do Box Sets For Under 9s 6 to 8 Years
Hold on while we process your request.