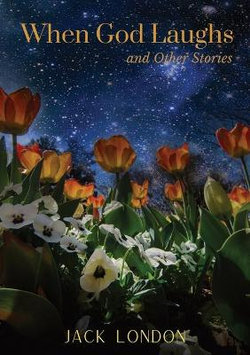 When God Laughs, and Other Stories

When God Laughs, and Other Stories By Jack LondonCarquinez had relaxed finally. He stole a glance at the rattling windows, looked upward at the beamed roof, and listened for a moment to the savage roar of the south-easter as it caught the bungalow in its bellowing jaws. Then he held his glass between him and the fire and laughed for joy through the golden wine. "It is beautiful," he said. "It is sweetly sweet. It is a woman's wine, and it was made for gray-robed saints to drink." "We grow it on our own warm hills," I said, with pardonable California pride. "You rode up yesterday through the vines from which it was made." It was worth while to get Carquinez to loosen up. Nor was he ever really himself until he felt the mellow warmth of the vine singing in his blood. He was an artist, it is true, always an artist but somehow, sober, the high pitch and lilt went out of his thought-processes and he was prone to be as deadly dull as a British Sunday-not dull as other men are dull, but dull when measured by the sprightly wight that Monte Carquinez was when he was really himself. From all this it must not be inferred that Carquinez, who is my dear friend and dearer comrade, was a sot. Far from it. He rarely erred. As I have said, he was an artist. Contents: - When God laughs- The apostate- A wicked woman- Just meat- Created he them- The Chinago- Make westing- Semper Idem- A nose for the king- The Francis Spaight- A curious fragment- A piece of steakNamed after the first story - about a couple that tries in vain to uphold an intensely idealistic romance against the erosions of time and the inconstancy of human nature - the collection explores themes for which London became famous: the struggle for survival in the midst of hostile environments, human nature's most elemental drives, and worker abuse in industrialized society.In The Apostate his concerns with the working poor and his dislike of pre-union-era capitalism are evident in a grim story about a young man who is brutalized by the subhuman working conditions in a textile mill, yet achieves a kind of liberation in the end.London's fascination with primitive male characters is evident in Just Meat, a story of two thieves who plot each other's demise in a selfish grab for a hoard of recently stolen jewelry.Like his famous novel The Sea Wolf, the stories Make Westing and The 'Francis Spaight' (described as "A True Tale Retold") portray corrupt sea captains abusing and terrorizing their crews during nightmarish voyages.In the concluding story, A Piece of Steak London starkly portrays the desperate struggles of an aging boxer as he grapples with a younger contender through most of a grueling twenty-round fight.As all of these stories vividly reveal, many of them brilliantly, no one had a more dispassionate and uncompromising view of human nature at its worst or could express it more forcefully than Jack London.

Be the first to review When God Laughs.

When God Laughs, and Other Stories