You can't help falling in love with these 20 challenging visual puzzles Look for the King and others in the drawings while reading interesting anecdotes about his life. Each art spread offers a list of things to find, followed by narrative about Presley's life in the depicted time period. From his humble beginnings to serving in the U.S. Army to Graceland, this book covers all things Elvis in the fun artwork of Victor Beuren and the writing of Andrew Grant Jackson. You'll be all shook up by one of the best-selling solo artists in history

Victor made the switch to become a full time artist in 2015. Victor’s art is influenced by pop art, games, family, and friends and is created entirely in ink, watercolor, or digital media. He’s often listening to Sertanejo music while he works.

Be the first to review Where's Elvis?. 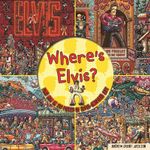