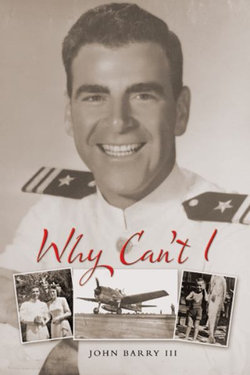 For almost 100 years photos, journals, newspaper clippings, Naval records and love letters waited quietly to tell the story of how a Depression-era Southern boy with nothing but talent and ambition rose to become a Navy fighter pilot and hero in WWII.

John Barry, Jr, born in poverty in coastal Carolina, lived with his siblings and parents in fish shacks and often had to scrounge through garbage to find food. He and his brothers and sisters were sent to an orphanage after his mother died and father couldn't find work. His athletic talent and personality earned him a college education and officer's training as a Navy pilot. He found love and married a hometown girl shortly before he was deployed. His personal journal entries told the story of the heat and exhaustion of life aboard the carriers, the loss of good friends in dogfights and bad landings, and the real horrors of the war. In stark contrast, his letters home were filled with descriptions of the beauty of the Pacific Islands, the friendships made aboard ship, his desire for home, as well as advice for his pregnant wife.

This stunning example of a war-time love story is filled with battle action, and is a personal look into the life and love of a man whose mantra was "Why Can't I." It is a journey of discovery into a different and more innocent time. Here are his times. This is his story.

Be the first to review Why Can't I.