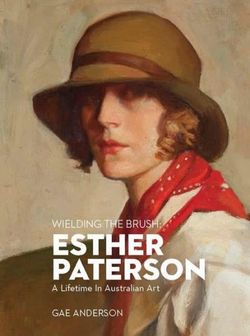 This book recuperates for art historians and the reading public the distinguished but forgotten career of the Melbourne artist, Esther Paterson. Aside from providing a close-up of Estheras oeuvre - sketches for newspapers and magazines, landscape painting and portraiture - the book illuminates her close association with her family, in particular her husband George Gill and her sister Betty Paterson, also an artist. Esther began classes at the National Gallery Art School (NGAS) under the tutelage of drawing master Fred McCubbin, and painting master Bernard Hall. She graduated in 1912. Her first major solo exhibition at Melbourneas Besant Hall in 1915 drew critical acclaim from Punch magazine and the Argus, The Age and Herald newspapers. Aussie Girls, Estheras book of watercolour sketches, published at the end of 1918, was an immediate success for its witty exposA of the new and permissive woman. Prime Minister William aBillya Hughes, a family friend, opened Esther and Bettyas joint exhibition at the Queenas Hall on Saturday 1 July 1922. But it failed to gain the critical response Esther received from her previous solo show. William McInnes, an Archibald Prize winner, invited Esther, a former NGAS classmate, to be one of his four sitters for the 1926 Archibald Prize. Of the sixty works submitted, McInnes won with Estheras portrait titled aSilk and lacea. Basking in the glory of McInnesa win, Esther invited the distinguished lawyer, Sir Randolph Garran, to open her second solo exhibition at the New Gallery in Elizabeth Street the following year. In 1938 Esther entered Sydneyas Archibald Prize with a portrait of her sister Betty titled The Yellow Gloves. She didnat win, but Howard Hinton purchased the arresting portrait for his collection at the Armidale Teachersa College gallery, now the New England Regional Art Museum (NERAM). In 1950 the Royal Society of Arts elected Esther a fellow of their Society (FRSA). Cheered by the honour she entered a portrait of the author Douglas Gillison in the Archibald. When William Dargie won it for the sixth time, she decided to take her final bow. Elected to the Council of the VAS, she received honorary life membership in 1962, and resigned on 8 May 1968. At a meeting of the MSWPS held in April 1964, the Society made her an honorary life member in recognition of her contribution to the Society since she joined in 1925.

Be the first to review Wielding the Brush.