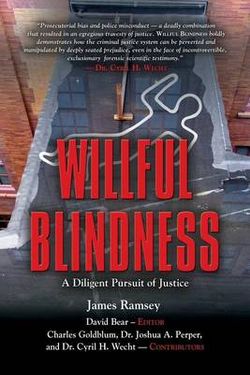 A Diligent Pursuit of Justice

A brutal assault, dying declaration, corrupt investigation, perjured prosecution, and intractable punishment system; all are elements in a process of Willful Blindness.

George Wilhelm was stabbed 23 times on the 8th floor rooftop of a parking garage and thrown off the building. Instead of falling to the ground, he landed one floor below, on a pedestrian bridge. Mortally wounded, he lived long enough to tell the police officer who found him: "Clarence. Clarence Miller did this to me."

The next morning, police arrested Miller, a city hall factotum, who quickly fingered Charles "Zeke" Goldblum, 26, as Wilhelm's killer. A lawyer at a prominent accounting firm, a dutiful citizen with no criminal record, Goldblum was also the son of a prominent Rabbi.

With two suspects behind bars, homicide detectives developed a complex case, also involving land fraud and arson. Both men were found guilty of first-degree murder, and sentenced to life.

But the murder case against Goldblum was fabricated, and both the attorney who prosecuted him and the judge who tried him called his case a "miscarriage of justice." Yet Goldblum has served 40 years for a crime he did not commit.

Be the first to review Willful Blindness.