Curl up with a true children's classic by reading A.A. Milne's Winnie-the-Pooh Winnie-the-Pooh may be a bear of very little brain, but thanks to his friends Piglet, Eeyore and, of course, Christopher Robin, he's never far from an adventure. In this story Pooh gets into a tight place, nearly catches a Woozle and heads off on an 'expotition' to the North Pole with the other animals. In this stunning edition of Winnie-the-Pooh, A.A. Milne's world-famous story is once again brought to life by E.H. Shepard's illustrations. Heart-warming and funny, Milne's masterpiece reflects the power of a child's imagination like no other story before or since. This charming edition is the ideal gift book for children of 5 to 55.

A.A. Milne grew up in a school his parents ran Henley House in Kilburn, for young boys but never intended to be a children's writer. Pooh he saw as a pleasant sideline to his main career as a playwright and regular scribe for the satirical literary magazine, Punch. Observations of little Christopher led Milne to produce a book of children's poetry, When We Were Very Young, in 1924, and in 1926 the seminal Winnie-the-Pooh.

More poems followed in Now We Are Six (1927) and Pooh returned in The House at Pooh Corner (1928). After that, in spite of enthusiastic demand, Milne declined to write any more children's stories as he felt that, with his son growing up, they would now only be copies based on a memory.

In one way, Christopher Robin turned out to be more famous than his father, though he became uncomfortable with his fame as he got older, preferring to avoid the literary limelight and run a bookshop in Dartmouth. Nevertheless, he published three volumes of his reminiscences before his death in 1996.

E.H. Shepard was born in London in 1879. He was a cartoonist and illustrator and went on to draw the original illustrations to accompany Milne's classic stories, earning him the name 'the man who drew Pooh'.

Be the first to review Winnie-the-Pooh. 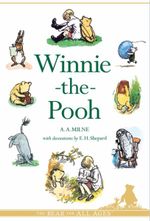