by John Ostrander and Tom Mandrake

In these never-before-collected tales from the 1990s, the Spectre witnesses genocide on a global scale, leading him to sit in judgement on humanity itself. And when he decides to wipe out the human race, it's up to DC's mystic heroes including John Constantine - Hellblazer, Etrigan the Demon, the Phantom Stranger, Doctor Fate, Zatanna and more to try and stop him. Plus: Professor Nicodemus Hazzard tries to control the Spectre with the magical artifact known as the Spear of Destiny, sending the Spectre on a rampage that only Superman has a hope of stopping. Collects THE SPECTRE #13-22.

Tom Mandrake is the popular artist of series including Firestorm, Grimjack, Martian Manhunter, New Mutants and The Spectre.

Be the first to review Wrath of God. 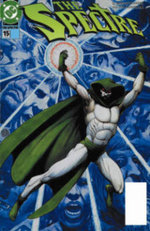 by John Ostrander and Tom Mandrake