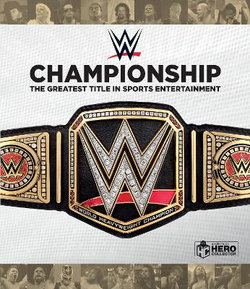 The Greatest Prize in Sports Entertainment

This deluxe oversized hardback book explores the history of the WWE Championship from Buddy Rogers in&nbsp;1963 to the current&nbsp;WWE Championship held by Drew McIntyre.

In its near 60-year history, the main WWE Championship has been held by over 50 Superstars and had its name/design changed 13 times. This book will explore the changing face of the WWE Championship via the Superstars that have held the title as well as the greatest matches for the championship.

Richly illustrated with official WWE photography, this book covers the WWE Championship by exploring each era of WWE in chronological order. The book explores each era of WWE:

A perfect gift, The WWE Championship: The Greatest Prize in Sport's Entertainment will be cherished by every member of the WWE Universe, new or old.

Dr Jeremy Brown trained at University College School of Medicine in London and completed his residency in emergency medicine in Boston.

He was the Research Director in the Department of Emergency Medicine at George Washington University before moving to the National Institutes of Health, where he now directs its Office of Emergency Care Research.

His opinion pieces have been published in the New York Times and Washington Post, and he has written for Discover magazine.

Be the first to review WWE Championship.