Awarded a Certificate of Commendation in The Whitley Awards 2003 in the category of Best Zoological Series. Volume 19.2A presents valuable nomenclatural and biological facts on the syncarids, isopods, tanaidaceans and other minor peracarid orders of Crustacea known from Australia. It offers full taxonomic information for 89 families, 351 genera and 1076 described species, with the original literature as well as museum data on the type specimens. Each family introduction is accompanied by a line drawing of a representative species. The volume gives ready access to distributional details for all species known to occur in the Australian fauna, both inside and outside Australian waters, along with a short summary of known ecological data where possible. All taxonomic groups down to families and subfamilies are fully diagnosed and the latest literature discussing their status is reviewed and summarised. Additionally, there are references to key works that can help identify the fauna at all taxonomic levels.
Among the highly varied isopod and tanaidacean Crustacea dealt with in this volume are the terrestrial slaters, woodlice, pill bugs, sealice and sea centipedes as well as a host of small sand-dwelling creatures of diverse morphologies. Other pericarids include the rare Mictacea, confined to the deep sea in Australia, and Spelaeogriphacea and Thermosbaenacea, found only in subterranean freshwaters. The other major group catalogued here are the Syncarida, small freshwater animals that are of particular interest in Australia where they inhabit lakes, streams and ground waters.

Be the first to review Zoological Catalogue of Australia: Crustacea: Malacostraca: Syncarida. 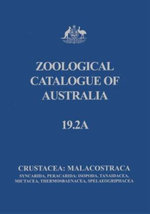 Zoology & animal sciences Crustaceans Zoology: Invertebrates
Hold on while we process your request.