Now fans can chronicle their adventures in this finely crafted writing journal, debossed with the iconic Horde insignia and featuring full-color endpapers with striking images. With sturdy construction and sewn binding, this journal of high-quality heavy stock paper take both pen and pencil nicely to invite a flow of inspiration. All this makes this World of Warcraft Horde Hardcover Blank Journal the ultimate game-inspired portable journal.

About the Author
Blizzard Entertainment, Inc. is an American video game developer and publisher based in Irvine, California, and is currently a subsidiary of American company Activision Blizzard. The company was founded on February 8, 1991, under the name Silicon & Synapse by three graduates of the University of California, Los Angeles, Michael Morhaime, Frank Pearce, and Allen Adham. The company originally concentrated primarily on the creation of game ports for other studios before beginning development of their own software in 1993 with the development of games like Rock n' Roll Racing and The Lost Vikings. In 1994 the company became Chaos Studios, then Blizzard Entertainment, Inc. after being acquired by distributor Davidson & Associates.

Be the first to review World of Warcraft Horde Hardcover Blank Journal (Large). 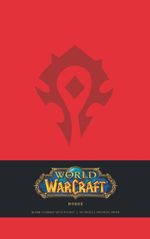