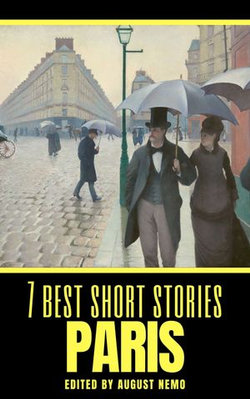 by E. T. A. Hoffmann, Edgar Allan Poe,  Guy de Maupassant and others

The city of Paris is part of the world's fantasy. Whether as the birthplace of democratic revolutions, or as the capital of love and romance. Writers and artists from all over the world have always looked to Paris for inspiration. In this book you will find seven short stories that have the city of Paris as their setting and inspiration: Mademoiselle De Scudéri - E. T. A. Hoffmann The Murders in the Rue Morgue Edgar Allan Poe A Queer Night in Paris by Guy de Maupassant A New Leaf - F. Scott Fitzgerald Babylon Revisited by F. Scott Fitzgerald A Street of Paris and Its Jean Monette By Eugene Francois Vidocq

Guy de Maupassant was born in Normandy in 1850. In addition to his six novels, which include Bel-Ami (1885) and Pierre et Jean (1888), he wrote hundreds of short stories, the most famous of which is 'Boule de suif'.

By the late 1870s, he began to develop the first signs of syphilis, and in 1891 he was committed to an asylum in Paris, having tried to commit suicide. He died there two years later. Be the first to review 7 best short stories: Paris.

by E. T. A. Hoffmann, Edgar Allan Poe,  Guy de Maupassant and others