Jesse Moriarty's whole life has been about one thing - making sure her father pays for the pain he caused their family. With her goals in sight, there's only one man standing in her way: Luc Sanchis.

Kidnapped and stranded on a Greek island with only his intriguing - and stunning - captor, Luc must uncover her secrets if he's going to get off this island and back to business. There's only one way that's sure to work: seduction. Now with the tables turned, who will come out on top?

Being shipwrecked on an idyllic deserted island for reality TV show Stranded sounded blissful...until I discovered I'd be sharing it with Jared Malone (aka he-who-broke-my-heart!).

I mean, of course I'll be fine. I don't feel anything for him anymore. Female viewers might swoon over Jared's tanned gorgeousness, but I know he's just an arrogant, over-muscled heartbreaker! The cameras are rolling, so I'm off to the beach to face him. I just hope I look okay in this bikini!

Propositioned By The Billionaire - Lucy King

When a gorgeous mystery man comes to rescue PR exec Phoebe Jackson at a disastrous party she's hosting, she's tempted by the sparks of desire igniting between them - and soon both their attraction and the party go up in flames!

But her rescuer is Alex Gilbert and he has her career in his hands, as well as a daring proposition: she must prove her worth by staging a prestigious charity event on an island paradise or she'll be fired! It would normally be no problem for Phoebe - but with the oh-so-sexy Alex by her side 24/7, can she keep her mind on the job...?

Be the first to review A Bachelor's Paradise. 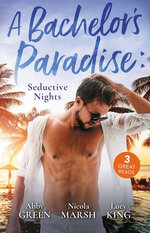