A Book of Bones

He is our best hope.

He is our last hope.

On a lonely moor in the northeast of England, the body of a young woman is discovered near the site of a vanished church. In the south, a girl lies buried beneath a Saxon mound. To the southeast, the ruins of a priory hide a human skull.

Each is a sacrifice, a summons.

And something in the shadows has heard the call.

But another is coming: Parker the hunter, the avenger. Parker's mission takes him from Maine to the deserts of the Mexican border; from the canals of Amsterdam to the streets of London - he will track those who would cast this world into darkness.

John Connolly is author of the Charlie Parker mysteries, The Book of Lost Things, the Samuel Johnson novels for young adults and, with his partner, Jennifer Ridyard, co-author of the Chronicles of the Invaders.

John Connolly's debut Every Dead Thing introduced the character of Private Investigator Charlie Parker, and swiftly launched him right into the front rank of thriller writers.

All his subsequent novels have been Sunday Times bestsellers. He was the winner of the 2016 CWA Short Story Dagger for On the Anatomization of an Unknown Man (1637) by Frans Mier from Night Music: Nocturnes Vol 2.

In 2007 he was awarded the Irish Post Award for Literature. He was the first non-American writer to win the US Shamus award and the first Irish writer to win an Edgar award.

Books to Die For, which he edited with Declan Burke, was the winner of the 2013 Anthony, Agatha and Macavity awards for Best Non-Fiction work.

Be the first to review A Book of Bones. 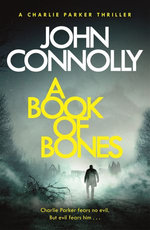 A Book of Bones