God gave Israel the greatest leader ever known. In failing to follow God’s man, the famous congregation betrayed a lack of faith in God himself. His great glory revealed among them is unparalleled in history. Yet now we remember them as the church in the wilderness, wandering outside God’s promised blessings. What can we learn of leadership and the special relationship between pastor and people?

Do these sound like things you can and should love about your pastor:
He thinks he's God's gift to the church
He is a Bible thumper
He's always stirring things up
He's asking for trouble
He routinely leads the church Into difficulties
He avoids me
He preaches hard
His ranting makes me sick
His wife is, shall we say, "different"
He asks the impossible
He rules over me
He's said some things he shouldn't have said
And he always preaches the same thing

These were the things about Moses that caused all the murmuring. And they are the complaints about and best qualities of great leaders today. More positively stated:
He is a gift from God
He loves the Bible
The Holy Spirit works in and through him
He is separated from the world
He leads by faith
He gives himself to prayer and the Word
He preaches truth and mercy
He hates sin
He loves his family
He has vision
He rules well
He bears his responsibility with grace
And he preaches the word of God

If you know a leader like this, then, stand by God's man!

Be the first to review A Leader Like Moses. 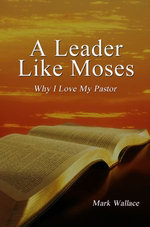