by Anna Davis and Shannon Grey

Scott is a handsome black student at university who absolutely adores white women. He makes love to two gorgeous white women in one day: First to the beautiful brunette Dorine, and then later that evening to the stunning blonde, Jolie.

Rayna and Vito are engaged to be married and they love each other dearly. However, there is something preventing them from enjoying their love life completely. Will their relationship survive?

Paul is in love with Carla, who constantly spurns his advances towards her. She has a boyfriend and vows never to leave him. However, things take a turn in Paul’s favor when Carla starts having difficulties in her relationship.

After watching a love tape starring Vlad (one of her students) and his ex-girlfriend, a female university Professor becomes infatuated with him. She desperately wants him to be her lover despite the fact that she is a married woman.

One day, she decides to invite him into her office to tell him exactly how she feels about him. Once Vlad enters her office, she can’t help herself. She wants him, but will she have him?

Ben is driving on the highway with his girlfriend when she decides to suck him. Distracted from the pleasure that Liz is giving him, he nearly collides with the car in front of him. After a confrontation with the driver of the other car, Ben drives to some woods where Liz finishes what she had started.

Mrs Dickson is an unsatisfied married woman. He rarely satisfies her in bed. He is a “one-minute-man” who does not last in bed. When the Dicksons employ a handsome French chef called Tariq, Mrs Dickson is instantly attracted to him. One morning when her husband is away, she takes advantage of the opportunity and makes love to her chef in her marital bed.

Denise is a flight attendant who is madly in love with Captain Brown. They have shared a few passionate kisses in the past but Denise wants more. She wants to sleep with the Captain. She wants him to be her lover, despite the fact that he is married. During a flight from London to New York, Denise and Captain Brown are alone in the kitchen when she decides to do something very brave. She knows that if they are ever going to make love, then she will have to take matters into her own hands.

When Senator White starts an affair with the much younger Emily, he thinks that it would be a good idea to employ her as his personal assistant. After some hesitation, Emily agrees to work for him. With Emily just a few feet away from him at least five days a week, they can enjoy each other whenever they want.

Joe and his pretty wife Sarah are very much in love. They can’t wait to get home every Friday night so that they can engage in their Friday Night ritual: several hours of passionate love making.

Jim is very much in love with his girlfriend Kathy and has plans to propose to her. He wants to ask her to marry him but he is afraid that she would reject him. He therefore comes up with a particularly strange way to propose to her, which guarantees that he won’t be rejected. 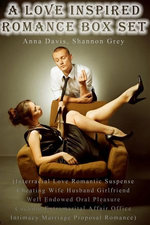 by Anna Davis and Shannon Grey