A Mate for the Savage

Audrey has known that the slave traders could come for her and her family at any moment, and that time came far too soon. When her mother and brother are killed, and she’s taken to the auctions to be sold to the highest bidder, she knows she can’t live the rest of her life in sexual servitude. But when she manages to escape it isn’t freedom she finds, but a barbaric and savage man that claims she’s his in any way he sees fit.

The moment Styx sees the female he knows she’ll be his mate. She’s human, and although he has human characteristics, he isn’t of her species. But what he knows for certain, what has every part of him tense and ready, is the fact his woman will have his baby inside of her.

She may fight him, but in the end she’ll know she was meant to be his in all ways.

Be the first to review A Mate for the Savage. 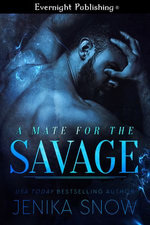 A Mate for the Savage