Prince Alfred, who was created Duke of Edinburgh in 1866 and became Duke of Saxe-Coburg Gotha in 1893, was the second son of Queen Victoria and Prince Albert. A patron of the arts, pioneer philatelist and amateur violinist, he joined the Royal Navy as a boy and rose to become Admiral of the Fleet. At the age of 18 he was elected King of Greece by overwhelming popular vote in a plebiscite, although political agreements between the Great Powers of Europe prevented him from accepting the vacant crown. The most widely travelled member of his family, he had visited all five continents by the age of 27, and while on a tour of Australia in 1868 he narrowly escaped assassination at the hands of a Fenian sympathiser. Married to Grand Duchess Marie of Russia, the only surviving daughter of Tsar Alexander II, at one stage he had to face the possibility that he might be required to fight on behalf of the British empire against that of his father-in-law. His last years were overshadowed by marital difficulties, alcoholism and ill-health, and the suicide of his only son and heir.

Be the first to review Alfred: Queen Victoria's Second Son. 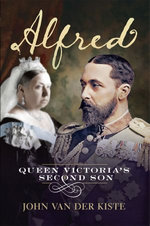