Honey is a headstrong shifter herself.

When they get together, it's one explosive claiming.

When his tour with the SEALs ends, he returns to the small town of Sugar Crest, Alaska. But the unexpected happens…he finds his mate in the form of a headstrong badger shifter named Honey.

In Logan's arms, Honey soon realizes how arousing submission can be, even if she’s always been the take-charge kind of person. But despite the fact she’s now mated to an overly possessive alpha, it's Logan who can barely maintain control.

Be the first to review Alpha Knows Best. 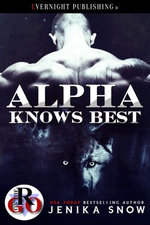