An Egyptian Message to George Clooney

As a liberal Egyptian and avid follower of political and social causes in Hollywood films, including those that actor George Clooney never ceases to tackle, author Nazek Taymoor points out this important artistic channel of communication between East and West.Clooney’s movies give a greater meaning to the true essence of cinema by analyzing and shedding light on the issues he confronts.Freedom of expression, oppression, capitalist corruption, carcinogenic products, Middle Eastern petrol abuse by first world countries, terrorism, and anti-terrorism are but a few of the concerns artistically presented by Clooney to the world.As an author, a daughter of the Middle East, and a passionate fan of George Clooney’s works, these issues also concern the author.The choice of art in the form of cinema is the core subject of An Egyptian Message to George Clooney, which considers the nature of film as a beautiful and untainted method of communication and exchange between different cultures, even after politicians have ruined other means of communication.The book details Clooney’s most prominent movies with critiques and examination, and also offers an extensive enumeration of his biographical, activist, professional, and most importantly, the political sides of his life and works.

Be the first to review An Egyptian Message to George Clooney. 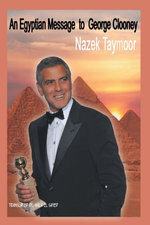 An Egyptian Message to George Clooney

Film theory & criticism Politics & government
Hold on while we process your request.