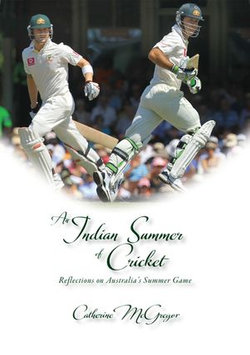 An Indian Summer of Cricket

Catherine McGregor has been a soldier, a writer and broadcaster with a life long passion for cricket. She has played cricket for over five decades and remains active as a player, coach and commentator. She was a selector for the Prime MInister's XI for two seasons. Catherine used the Indian tour of Australia in 2011-12 to examine the future of traditional Test Cricket facing the commercial pressures generated by new, shorter forms of the game.

During the writing of the book Catherine recognised that she was facing the same question in her own life that she had posed about cricket. Can I survive or must I change? Her answer shocked many in Australia and around the world. Now, five years later, she offers revised insights about the future of the game and reflects on the response of the cricket world to her gender transition to which she alluded in the final pages of the original edition.

Indian Summer is a lyrical, moving account of the how the spirit of cricket enabled the game to embrace Catherine McGregor's radical transformation. She paints exquisite portraits of some of the greatest names and recounts her experience of some of the game's most hallowed venues. Indian Summer will touch the heart of cricket purists and lovers of fine prose alike.

Be the first to review An Indian Summer of Cricket. 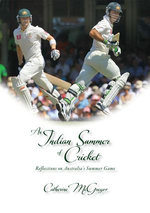 An Indian Summer of Cricket

Cricket Australasian & Pacific history Biography: sport
Hold on while we process your request.