Example in this ebook

The true author is recognisable by the existence on every page of his works of at least one sentence or one phrase which none but he could have written.

Take the following sentence: "If we may believe this amiable shepherd of souls, it is impossible for us to elude divine mercy, and we shall all enter Paradise—unless, indeed, there be no Paradise, which is exceedingly probable." It treats of Renan. It must be written by a disciple of Renan's, whose humour perhaps allows itself a little more licence than the master's. More we cannot say.

But take this: "She was the widow of four husbands, a dreadful woman, suspected of everything except of having loved—consequently honoured and respected." There is only one man who can have written this. It jestingly indicates the fact that society forgives woman everything except a passion, and communicates this observation to the reader, as it were with a gentle nudge.

There is only one man who would excuse Nature for her indifference to us human beings in these words: "It is very difficult to be everything."

Read this passage: "It is a great infirmity to think. God preserve you from it, my son, as He has preserved His greatest saints and the souls whom He loves with especial tenderness and destines to eternal felicity."

It is an Abbé who speaks thus, and who speaks without a trace of irony. One is conscious of the author's smile behind the Abbe's seriousness.

Few are so pithy in their irony as France. He says: "Cicero was in politics a Moderate of the most violent description."

But there is only one man who can have written: "The law, in its majestic equality, forbids the rich as well as the poor to sleep under bridges, to beg in the streets, and to steal bread."

This one man is Anatole France. Most noticeable in this style is its irony; it stamps him as a spiritual descendant of Renan. But in spite of the relationship, France's irony is of a very different description from Renan's. Renan, as historian or critic, always speaks in his own name, and we are directly conscious of himself in the fictitious personages of his philosophic dramas, and even more so in those of his philosophic dialogues. France's irony conceals itself beneath naïveté. Renan disguises himself, France transforms himself. He writes from standpoints which are directly the opposite of his own—primitive Christian, or mediæval Catholic—and through what is said we apprehend what he means. Other writers may be as witty, may be or appear as delicately ironical—they still do not resemble him. If we enter the dépôt of some famous china manufactory with a piece of china from some other factory, as faultless and as beautiful in colour as those by which we are surrounded, the saleswoman takes it into her hand, looks at it, and says: "The paste is different."

To be continue in this ebook

Be the first to review Anatole France. 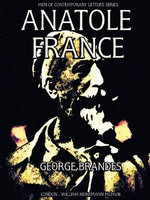 Biography: literary Biography: historical Biography: general
Hold on while we process your request.