Irony is for the ironic. He has shown himself military at the last, but I believe Anatole France would have smiled, a little wistfully, if told that a young man had sentenced himself to read every one of his works and to write a book about them while there raged round him a European War. Such an atmosphere may seem unpropitious, but it was not really so; it was an atmosphere of paradox; it was odd to analyse the great pacifist while Europe writhed in conflict; still odder to think of him as throwing aside his pen and at the age of seventy taking up his forsworn sword. But in the case of Anatole France the work is as great as the man and it afforded me a contrast with patriotism. This background of patriotism, so queerly compounded of beer, sweat, fine courage, self-sacrifice, self-interest, of insane prejudices, heavy ignorances and melting heroisms, was so exactly what I needed to bring out the dapper quality of the great Frenchman’s thought. No muddled impulses here, but a clear, cold light which reveals, together with all that is beautiful, all that is ugly; here a brain that is without illusions, and yet without bitterness; that is not taken in by flags, and priests, and frontiers, yet at the same time can love priests for their faith, flags for their symbolism, frontiers for the contrasts they create in man. In On Life and Letters, Anatole France tells us that during the war of 1870 he sat practically under the fire of the German guns, with M. F. Calmette, reading Virgil. I did not write these lines under the fire of the German guns but, in the hectic atmosphere of war-time, to write about Anatole France created in me no doubt much the same kind of feeling as was his that day. I do not apologise for the egotism which is already invading this monograph, and I suppose I shall remain egotistic as I go on. For the works of Anatole France are too bulky, too many to be appraised one by one; they raise so many issues that a fat quarto volume would hardly suffice to analyse all, and it would be rather dull. Believing that criticism is “the adventures of the soul among masterpieces,” I am much more inclined to give the adventures of my intellect (claiming no soul) among the works of Anatole France. I have read very little about him, indeed but one book, by Mr Georg Brandes, and in the early part of 1914 a number of articles when Anatole France paid us a visit. They are very distressing, those articles, as they appear to have been written mainly by men who do not know what they are talking about, but can talk about it exactly to the extent of a column. I refer to the alleged evolution of Anatole France, of which something must be said a little further on.

Be the first to review Anatole France. 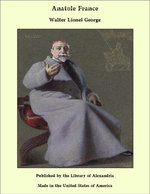